Indulge in a delicious thick and creamy soup without the carbs!

And did I mention Bacon?

At no additional cost to you, I make a small commission for purchases made through links in this post.

There is something so magical about cool rainy afternoons, fuzzy socks and sipping hot coffee by the fire. It’s sad to say goodbye to summer but this year I’m giving fall a very warm hello. There were so many forest fires again this year, I have been eagerly awaiting the rain and more than excited to say goodbye to the constant smoke in the air. It’s nice to see the stars again on a clear night and know our forests have stopped burning to the ground.

One of my favourite things about fall? Hot soup! I eat soup all year long, so when it’s hot out, eating soup in a house that’s 30 degrees isn’t the most fun thing I can think of. Paired with an iced coffee it’s manageable, but so much more enjoyable when it’s cold outside!

To celebrate the coming soup and chowder season, I made this yummy low carb Cauliflower Chowder with Cheese and Bacon. It’s absolutely delicious!

How to make Cauliflower Chowder

I love this dish! From start to finish you can have a delicious soup within an hour!

Start by frying some bacon in a heavy bottom soup pot. While it’s cooking chop up the celery, onion, cauliflower and press the garlic. Once the bacon is nice and crispy, set aside and toss the celery and onion into the hot soup pot (still full of the bacon grease). Cook until the onion becomes transparent, then add the garlic, thyme, salt, pepper and cook for 1 minute. Add the cauliflower and toss to coat, then pour in the bone broth.

Add enough broth so that it just barely covers the cauliflower. Bring the chowder up to a boil, reduce to a simmer and cook for 20 minutes, or until the cauliflower is soft. Carefully puree the whole chowder with an immersion blender, or a regular blender would do the trick (however you would want to cool the chowder first before dumping into a blender). Add the cream and cheddar and stir until the cheese has melted.

Divide between 5 bowls, garnish with shredded cheddar cheese and top with the crumbled bacon. Serve and enjoy!

What to serve with Cauliflower Chowder

Subscribe to Mama Bear’s monthly newsletter to be kept up to date on the latest and greatest recipes!

Cauliflower Chowder with Cheddar and Bacon

Nutrition Facts Nutrition facts are an estimate only! The ingredients you choose could have different nutritional values than the ingredients I have used. Deduct fibre from the total carbs to get 6.1 g net carbs per serving. 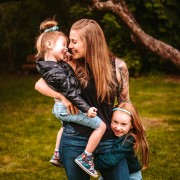 Hi, I’m Aleta! I love to create healthy recipes for my family; meals my two little stinkers actually love to eat. Raising kids can be hard, but eating healthy doesn’t have to be with the right recipes!